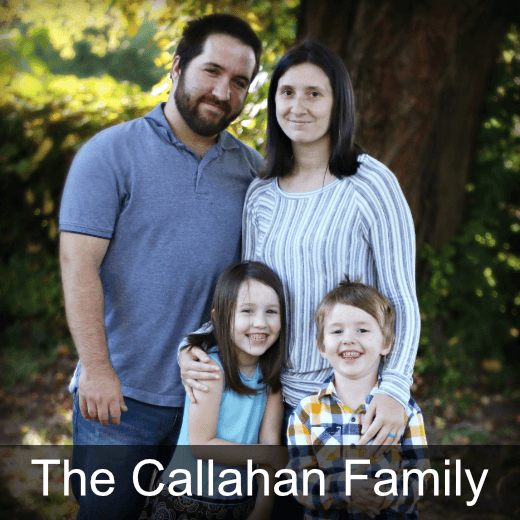 Habitat for Humanity builds homes. That’s something most people are familiar with. The ripple effect that Habitat has on partner families is perhaps something less familiar. For the Callahans, partnering with Habitat and the promise of a new home has rescued their relationship. In their young lives, Brooke and Cody Callahan have experienced numerous challenges, including housing and job insecurity, but the relational capital they’ve built has been a most remarkable consequence.

“Before Habitat, Cody and I were having some personal issues. I think we even split up at one point. We continued to co-parent the kids, but at that point, we thought there’s no reason to keep trying.”

Since partnering with Habitat, so much has changed.

Cody and Brooke beat the odds and got married in September of 2020. When they break ground on their new home at the end of this year, they’ll be on their way toward the milestone of homeownership.

The partnership with Habitat has strengthened and deepened Brooke’s relationship with her mom as well. Since all Habitat homeowners must volunteer a minimum of 350 hours before receiving the keys to their home, Brooke and Cody have regularly leaned on grandma for childcare. Brooke’s mother has been with the young couple every step of the way.

Ironically, Brooke almost didn’t apply to Habitat because she feared the burden of fulfilling volunteer hours while being responsible for two young children. Quite the contrary, she’s been surprised by the relative ease she’s had to meet the volunteer hour requirements, as her mother has stepped in to watch Raegan, age six, and Bentley, age four, as needed. It’s a meaningful turn of events, as, in the past, Brooke’s mom had her concerns about the young couple’s future together.

That future is bright! On a beautiful November morning, Brooke sits relaxed on a park bench and freely shares her story of growing up and growing together with her nuclear and extended family. She and Cody have their lives in front of them. They’re young, working and studying, and making plans for a better life. With the support they have found through their extended family and Habitat, their future is bright and brimming with opportunity.

Brooke, 26, is a full-time student majoring in psychology with a concentration in child and family studies at EKU. Cody, 27, is a welder at Qualex in Richmond. They were shocked and thrilled when Habitat called to inform the couple of their acceptance as a partner family. Cody couldn’t believe the news. He needed Brooke to send a picture of the official letter.

Their current home, a trailer with a rickety deck, dilapidated roof, and unreliable appliances, will be only a memory come summer when the Callahans move into their new Habitat home in Berea. This new home will be less than a mile from Silver Creek Elementary School, where Raegan and Bentley will attend. Brooke and Cody are thankful that their kids will enjoy a safe home and the opportunity to dream. The children are dreaming of a pool, swing set, trampoline, and a dog.

Brooke sees partnering with Habitat as an opportunity for her children to learn lessons about hard work, resilience, and positive outcomes.

“I think this is going to teach them that with hard work comes rewards. There may be struggles in the beginning, and there may be the whole time that you’re doing the hard work, but in the end, you’re going to be rewarded,” she says.

Building homes, building hope, and building relations. The rewards from partnering with Habitat are many, and Cody and Brooke are experiencing the rich rewards of relationship, security, and a brighter future!

This new Habitat home for the Callahan family is sponsored by Novelis in Berea, Kentucky. In addition to sponsing this home, Novelis faithfully provides funding through Can Houses in Madison and Clark Counties. 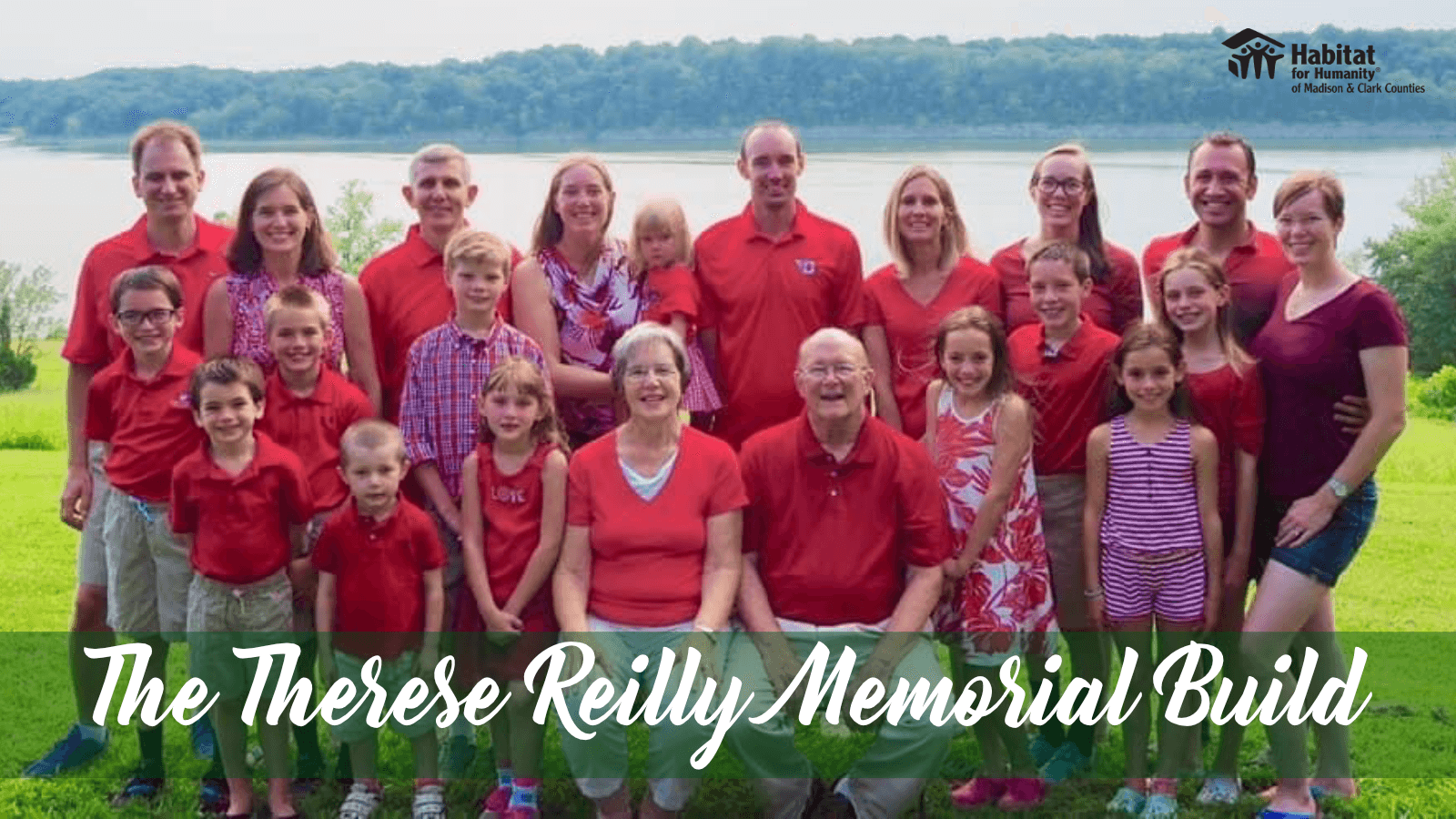 The Reilly family is partnering with our local Habitat affiliate to help make this home for the Callahans possible as they honor the memory of their beloved wife and mother, Therese Reilly. Find out how you can join them in remembering Therese’s life of service by giving and serving in her name. 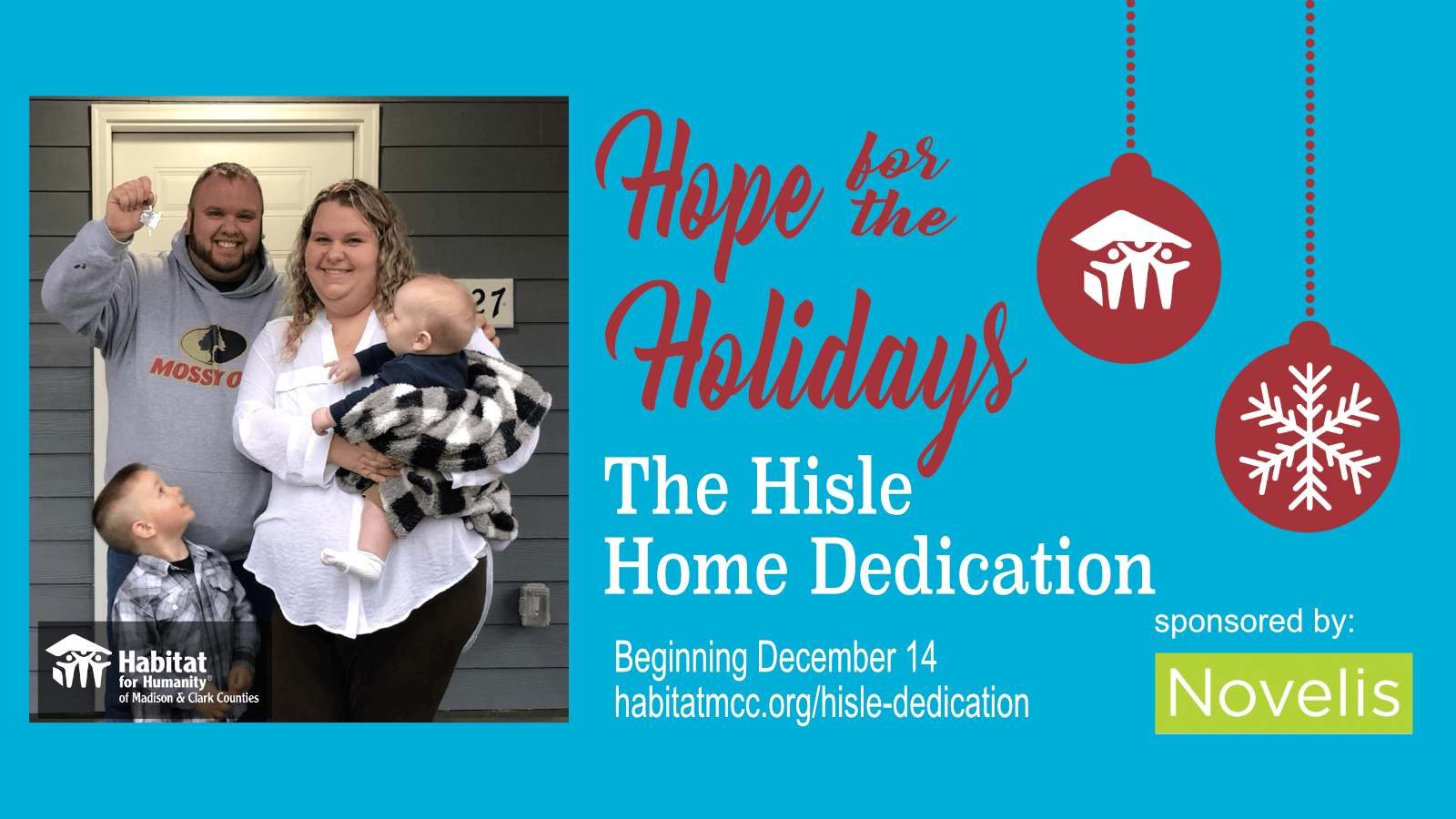 Home for the Holidays Many hours of hard work have gone into transforming the Hisle's recyled house into the perfect place for them to call home, and now, they will be moving in just in time for Christmas!  To ensure everyone's health and safety, the dedicaiton for... 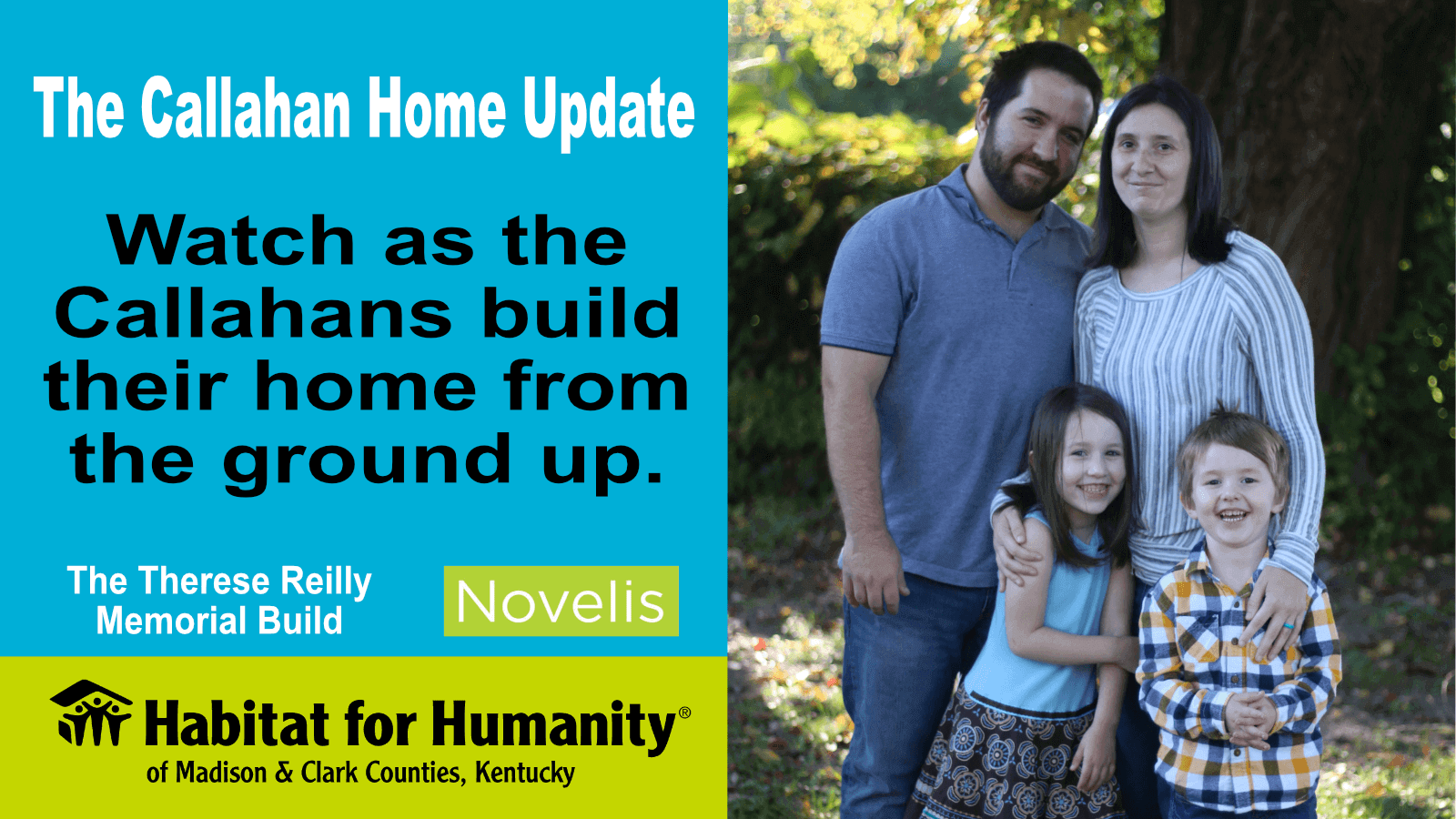 The Callahan's home is underway and we want to keep you up to date with the progress. Scroll this page for videos that will give you a front-row seat as they build their home from the ground up.The Paint, Floors, Cabinets, and More! June 25, 2021 The Callahan home is... 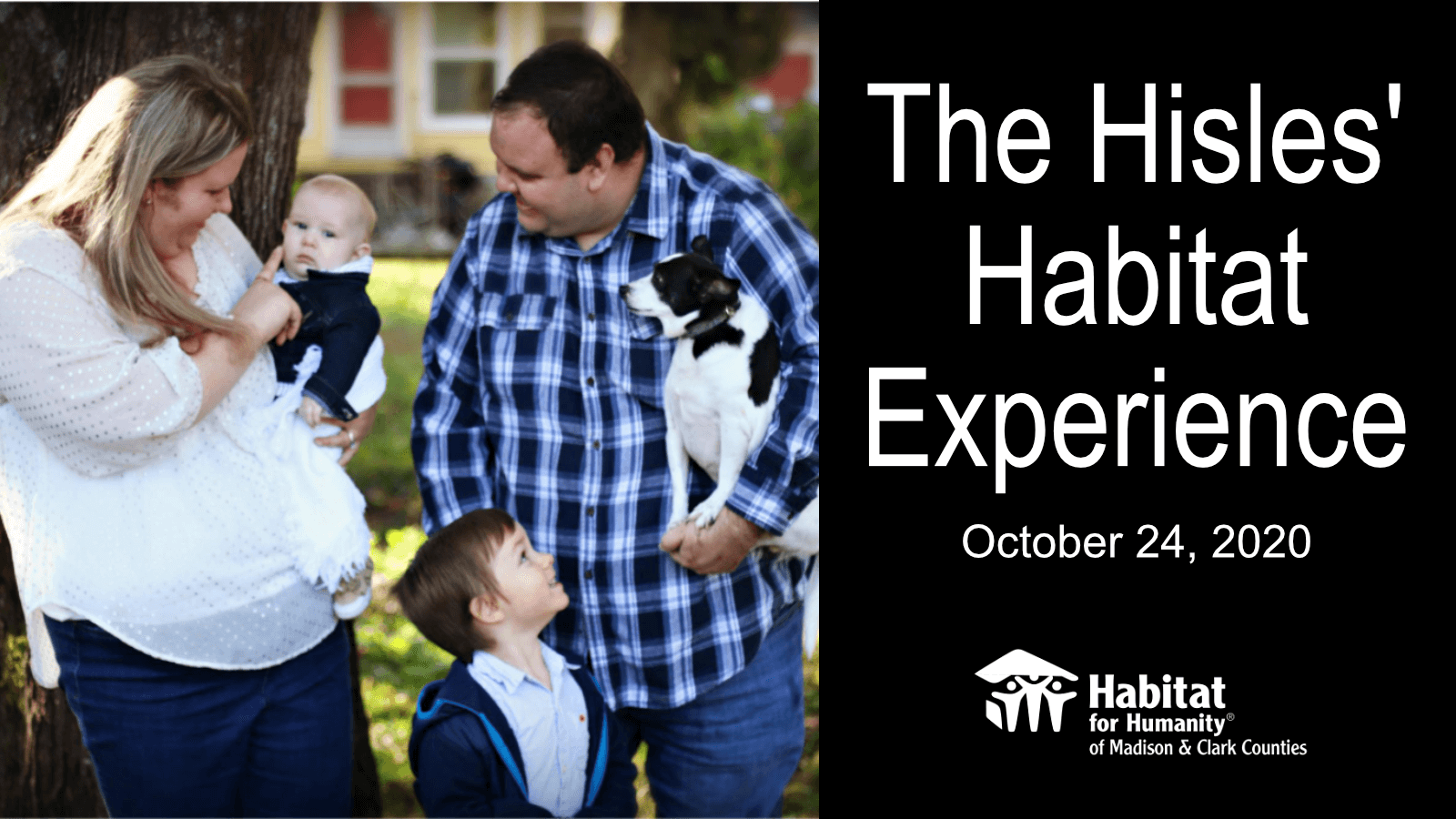 Gary and Amanda Hisle take a moment to share what it has been like being a Habitat Partner Family and how their Habitat experience is changing their lives. Gary, Amanda, and they boys will be moving into their Habitat home in early December, just in time to decorate... 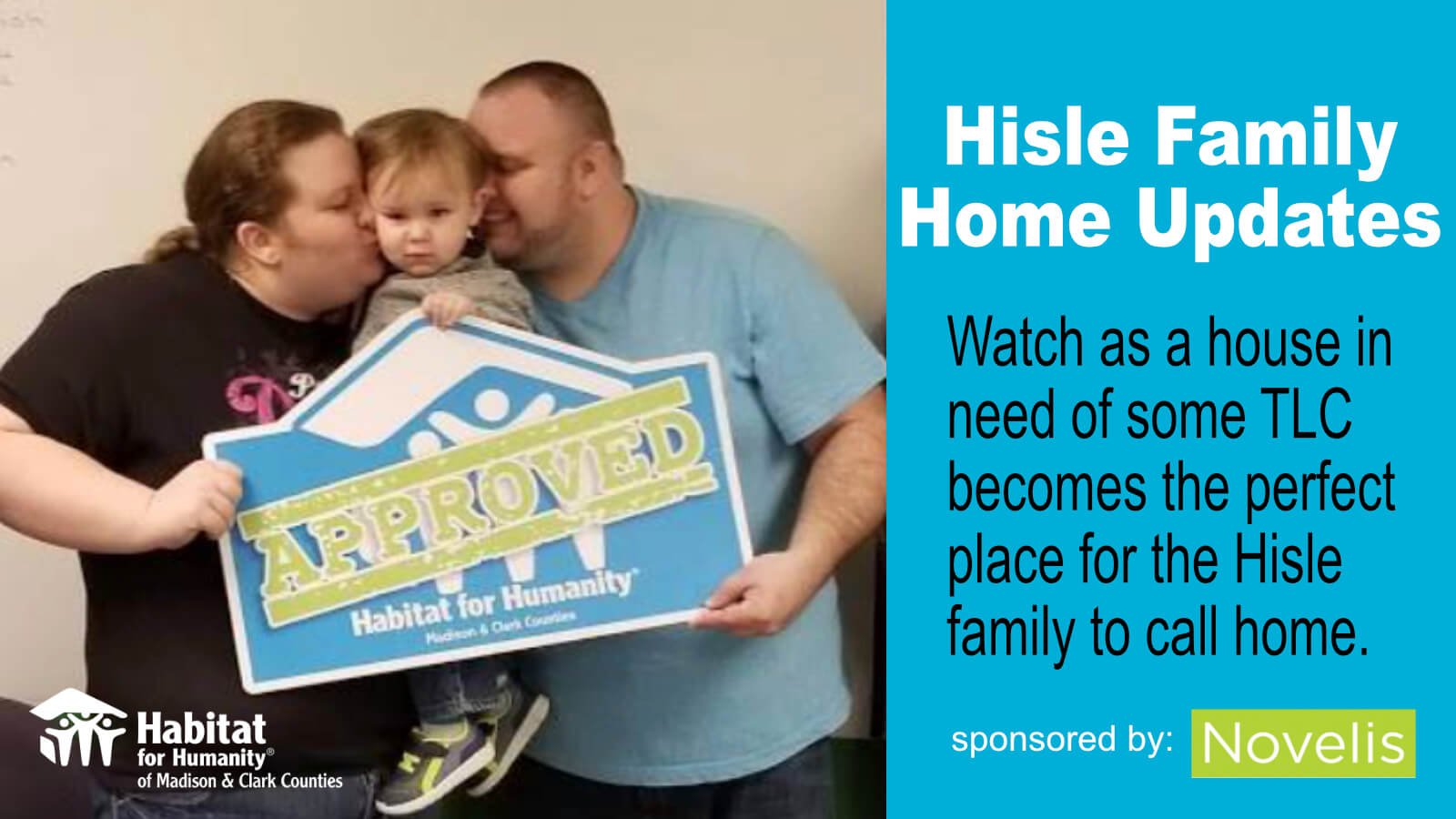 This recycled home is made possible by the generous sponsorship of Novelis in Berea, Kentucky. In addition to sponsing this home, Novelis faithfully provides funding through Can Houses in Madison and Clark Counties.Mission Accomplished! 12/5/20 We are thrilled to... 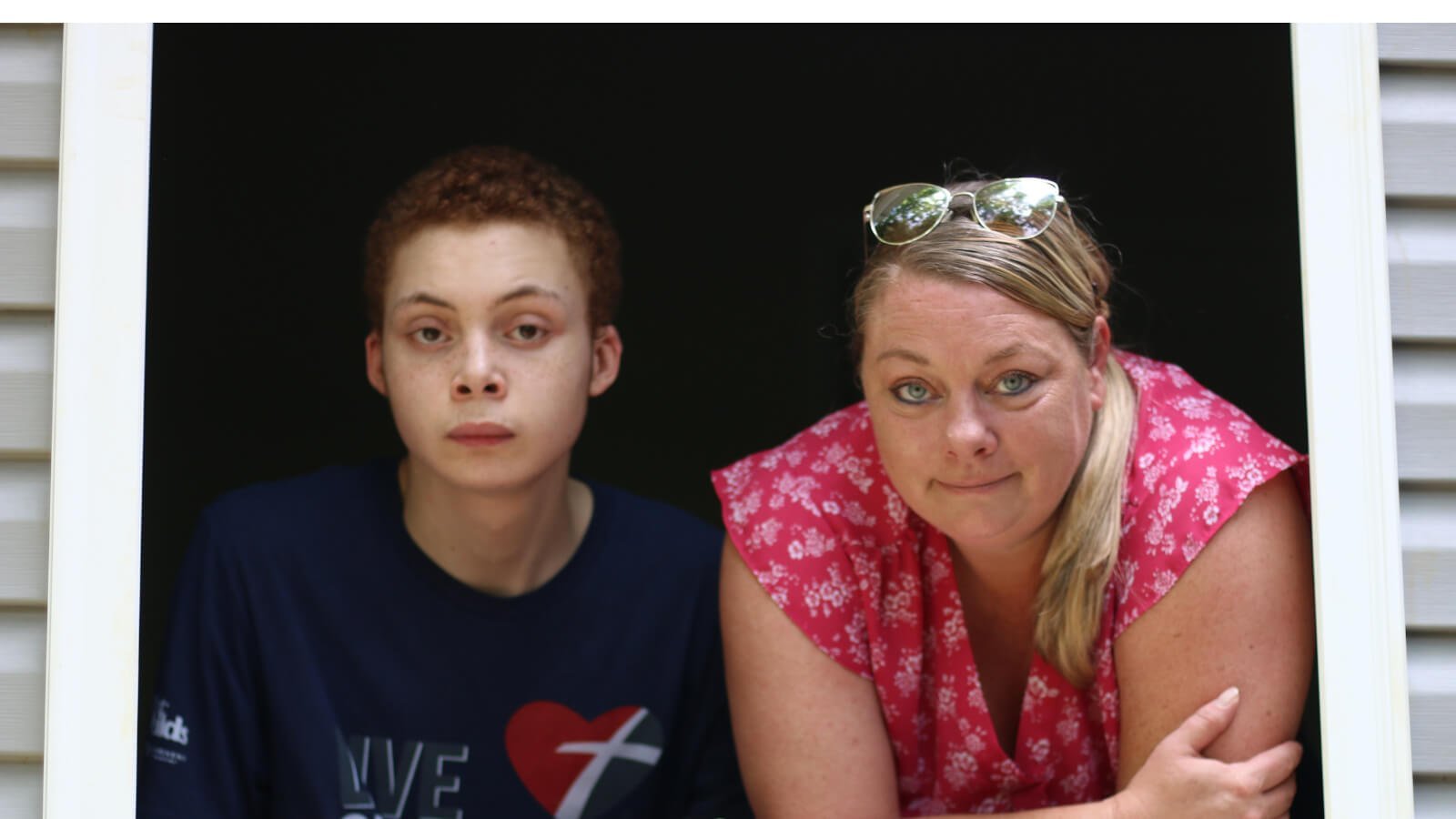 Angelina King knew that building her Habitat home on Parish Avenue in Richmond would be a process. Clearing the land, pouring the foundation, enduring weather delays—it was all part of the plan. She expected, piece by piece, project by project, that her Habitat home... 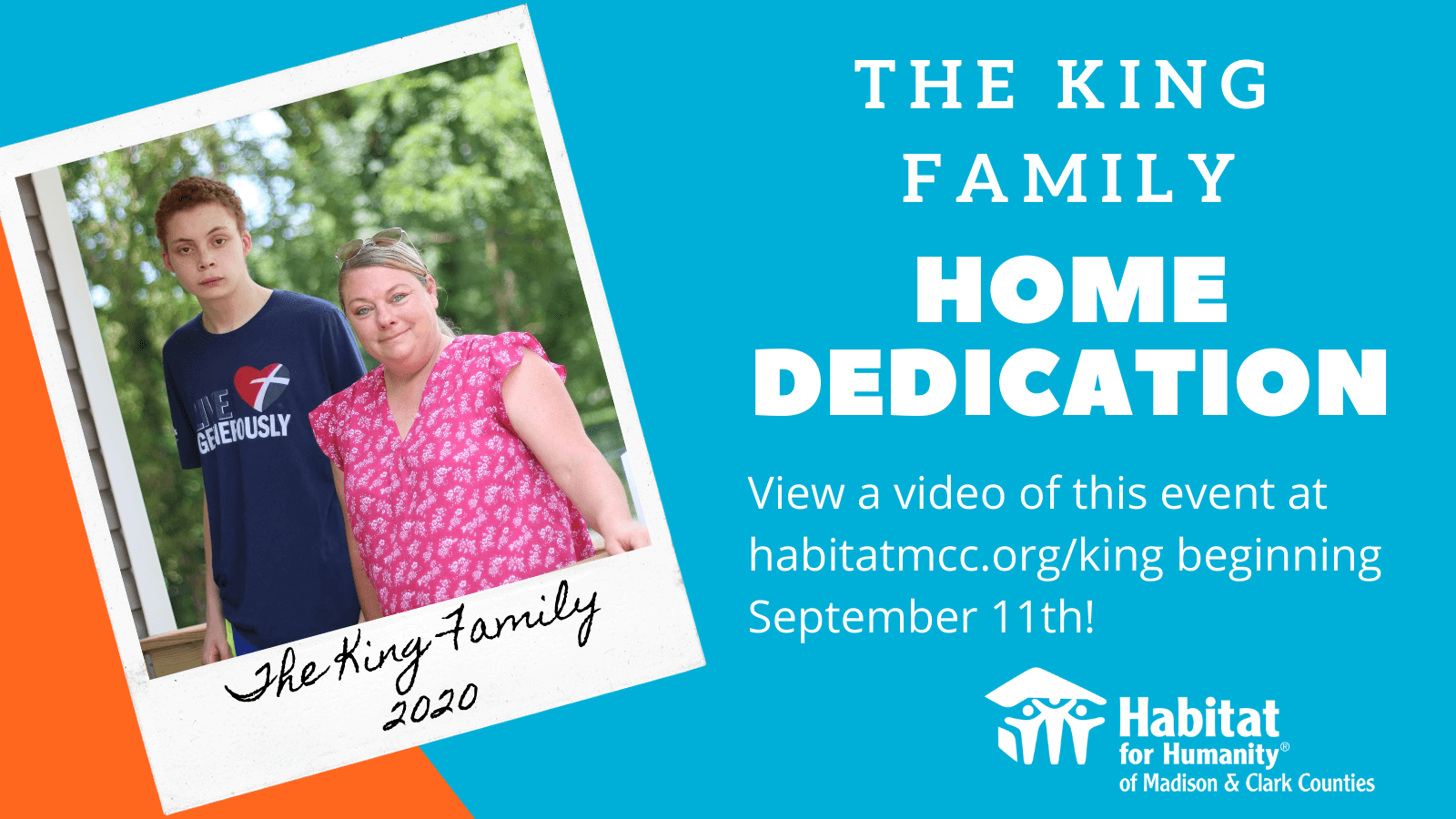 Angie’s road to homeownership was challenging, but she walked it with grace and determination. Now it is time to celebrate with a home dedication! Although the King Family Home Dedication is a virtual event, the joy is still very real! We hope you join in the...

Habitat for Humanity
of Madison and Clark Counties
Administrative Office